Empire of Sin is one multifaceted gaming experience, bringing you into the world of gangsters, specifically Chicago in the 1920s where the city is a ticking time bomb ready to explode with all the rivals fighting over each other trying to one-up the other towards complete control. Empire of Sin has some of the most well-known Mafioso including Al Capone, John Dillinger, and the Genna Brothers.

Chicago during this period was the scene of some of the most gruesome crime feuds in history and development studio Romero Games does a great job at taking us back in time to not only experience it but also write our own history, with violence and a bit of booze in the mix.

Before any rampaging of the city of Chicago can begin we are given a choice on which boss/don we are willing to take to the top, some of them are historically accurate like Al Capone while others are more fictitious. Choosing a boss is critical as each one has unique combat abilities as well as their own campaign that tells their personal story and even allows decisions to be made that could change the outcome of how the city will remember you during your reign of terror. 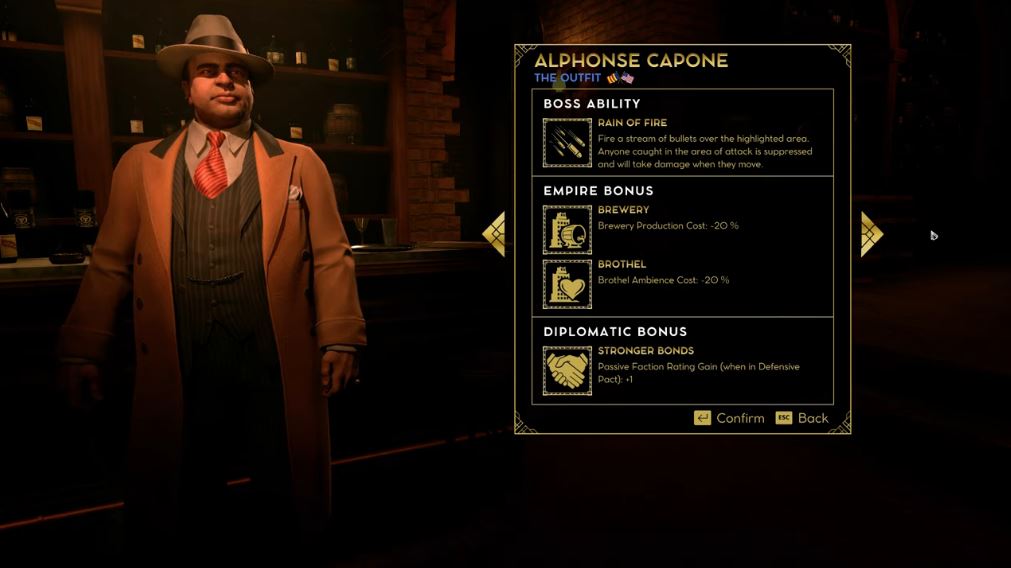 The game's narrative offers an interesting slice of history and I must applaud Romero Games for doing the in-depth research to bring us the various stories and points of view from that era to as close to real-life as possible. The most fascinating aspect of all this is the fact that the majority of gangsters really existed and you can learn more about them and what they did through the narration and experience during your hours of gameplay. Choosing the "life" path of our boss and the way in which he manages the various situations that arise before them is all about strategy and execution, excuse the pun, sometimes the strategy is a high risk, but as the saying goes high risk equates to high reward, so plan and execute effectively. The strategy is key in dominating the city, in some ways you can choose between just paying the high price and taking the risk of enduring the intimidation tactics or take more financial losses because you chose to retaliate. 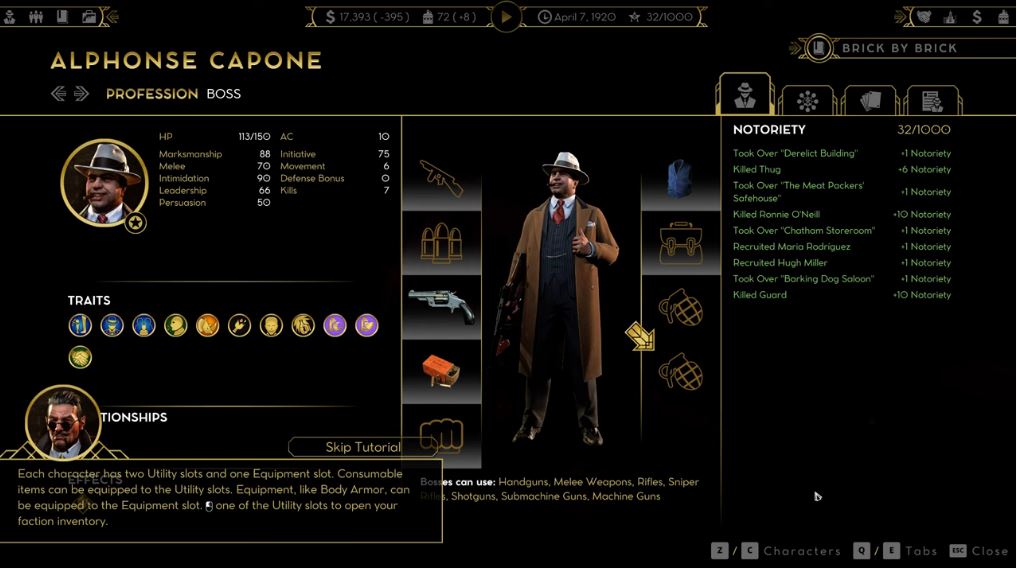 As part of strategizing your way towards the keys to the city, there are two main aspects to helping you achieve this. Your crew and the all too familiar sit-downs, very common in the gangster world. Your empire cannot be managed by you only, as they say, it takes a village to prosper, and with that, you will need your trusted crew who you vet and hope their own conflicts, friendships, and side missions don't hinder the boss's rise to power. Your crew has life-inspired traits to which others will be added as their path deepens and in many cases, it often dictates not only their behavior but also their way of life.

As for the classic sit-downs, this is where the Empire of Sin really shines and brings out the realism we have come to expect from the diplomatic sessions in both movies and shows. During the sit-downs, you and another boss sit opposite each other to make your positions clear, through a series of entertaining and engaging exchanges, where you will need to leverage the strengths and weaknesses of the rival to come to an agreement that will benefit you towards your goals. Even though I had a good experience with Empire of Sin, there were a few issues, considering that the characters' facial expressions were lacking and the gestures are often highly emphasized without a reason to be, but overall the narrative and life choices you get to make really help the game shine and I had a good experience taking control of Al's story. 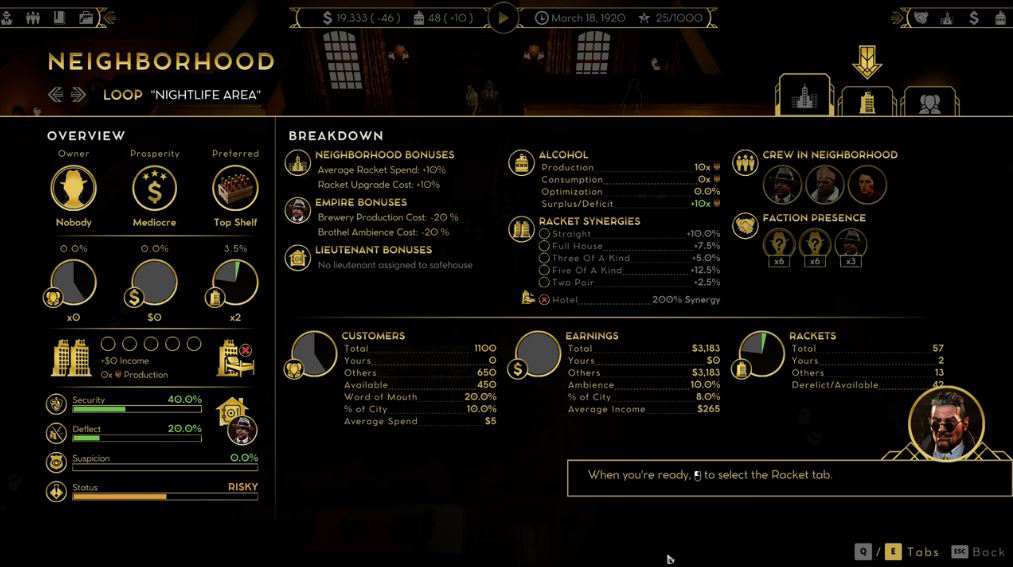 The gameplay does not stray too far from what we have come accustomed to in turn-based combat, the major difference in Empire of Sin's case lies in its economics, so with regards to the various property options in the city, each type of building has five expansion stages in different areas. In the brewery, for example, we would increase the quality of the alcohol it would produce once we have obtained enough funds towards the expansion leading to a higher turnover. With an additional income from the illicit alcohol, there will be the issue of dealing with the police, as was reported in those days many law enforcement officers looked away or took part in some of these illicit dealings and so in Empire of Sin you will need to give the gentlemen in blue a thick wad of cash every now and then so that they can look in a different direction while you build your empire.

Parts of the gameplay is highly repetitive which I expected as I have played my fair share of strategy games to know this, however, some of the combat is unbalanced in a way that heavily favors us which is cool if you are not interested in tough combat scenarios but to be honest in the world of the mafia it should be, that world is unforgiving. In short, everything necessary to create epic battles is diluted down and these battles are easy and part of it has to do with the questionable AI, in many cases the battles can be concluded in the blink of an eye. Tactics can be thrown out the window and raiding a boss's headquarters to kill him and take control of his market share you can, pushing the realism out the door. Don't get me wrong I like the game, It got so many things right, just the underwhelming boss fights dulls the experience for me a bit, but the overall experience was well worth it. 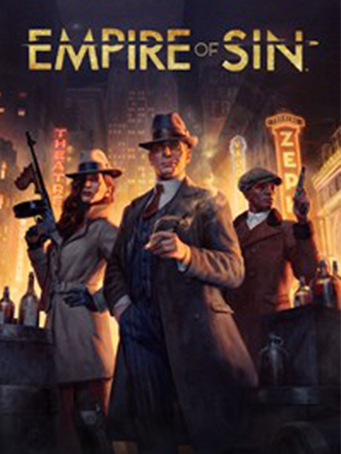 Empire of Sin is a good game with many of the turn based strategy elements we have grown to love, however, with some additional interesting gameplay features combined with the mafia narrative it makes for a great experience, however it doesn't innovate much, which is not a bad thing but would have been great to see something that deviates from the norm.

Their are some glaring issues in Empire of Sin, including the unbalanced battles you will encounter, but no matter how many times I thought I was out, Empire of Sin pulled me back in. The overall representation of Chicago during the 1920s and its well crafted narrative makes this a must play Strategy game.