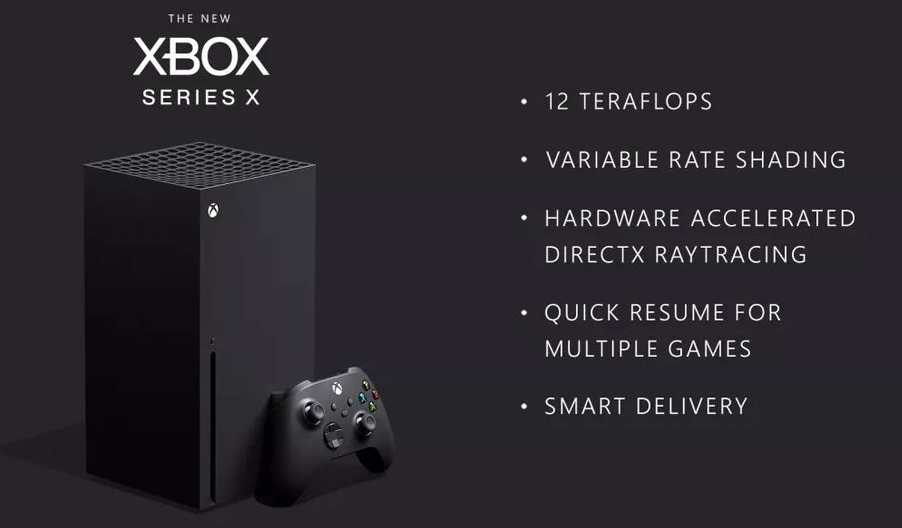 We might not have a price yet, but by the looks of things, Microsoft is revealing more and more about the upcoming Xbox Series X that I feel a price announcement is imminent.

Microsoft has released new specifications for the Xbox Series X today, with the 12 teraflops of GPU performance officially confirmed, to put that into perspective that is twice the power of the Xbox One X and eight times the original Xbox One.


Xbox Series X will include a custom-designed CPU based on AMD’s Zen 2 and Radeon RDNA 2 architecture. Microsoft is also using an NVMe SSD on the Xbox Series X, which promises to boost load times and “nearly every aspect of playing games is improved,” according to Spencer.

Microsoft states that the Xbox Series X will support 8K gaming and frame rates of up to 120fps in optimised games. Microsoft says it has partnered with the HDMI forum and TV manufacturers to enable Auto Low Latency Mode (ALLM) and Variable Refresh Rate (VRR) on the Series X as part of its HDMI 2.1 support, ultimately reducing the input lag and smooth out visuals on TVs. Microsoft will support full backward compatibility on the Xbox Series X, including the original Xbox and Xbox 360 games.

“Our commitment to compatibility means existing Xbox One games, including backward-compatible Xbox 360 and original Xbox games, look and play better than ever before,” Xbox head Phil Spencer wrote in a blog post. “Your favorite games, including titles in Xbox Game Pass, benefit from steadier framerates, faster load times and improved resolution and visual fidelity – all with no developer work required. Your Xbox One gaming accessories also come forward with you.”

12 teraflops and so much more. Discover what the next generation of gaming means to Xbox: https://t.co/WWFJ6YkHzT#PowerYourDreams pic.twitter.com/RDlWXwVF8f

Gamers should never be forced to purchase the same game twice or pay for upgrades. Owners of #Cyberpunk2077 for Xbox One will receive the Xbox Series X upgrade for free when available. https://t.co/nfkfFLj85w

Microsoft will share more details about the new Xboxin the coming months as we approach the next edition of E3 in June. We can most likely expect pricing, news on availability and the possible launch titles around the time of E3 2020.

Still a while to go as the console is only expected to launch this holiday season.